Album: Lizzo – Cuz I Love You

Album: Dave’s ‘Psychodrama’ is a brutally impressive examination of society

“The ‘best’ art (if such a thing exists) holds a mirror up to society, allows you to look into it and then questions whether you’re happy with the reflection that you’re presented with. Dave‘s debut album, Psychodrama, does all that and more: it asks the all-important question before proceeding to answer it in immaculately complex and empathetic detail. Punctuated with spoken interludes that appear to take place in a therapy session, Psychodrama starts as it means to go on. With the guttural album opener “Psycho”—which thrashes between dismissive arrogance and naked vulnerability—Dave begins by painting a painful, but very necessary picture of the discussions being had around mental health within the black community. ”

“The question regarding Nao’s second album is whether she makes a push for the chart success that is surely within reach, or digs deeper into her auteurish groove. And on Saturn, although her sugary vocals have remained intact, her artistic and personal growth is evident.

Based on the astrological theory of the “Saturn return” – the paradigm shift said to occur every 29 years in a person’s life – the record operates on a huge, kaleidoscopic scale. It spans ecstasy to despair, with cosmic bops (Gabriel) sitting alongside intimate confessionals (Saturn featuring Kwabs). Its moments of experimentation pay off: on Orbit, she pushes her vocals into new realms through distortion and impressive gospel-style runs.”

“The triumph of Mai’s first single lay in its ability to cut through a scene full of trap beats and emo rap, with a refreshing blend of nostalgic romanticism, simplicity and an Urban Dictionary-savvy hook. But occasionally, Mai’s use of meme-able lyrics and an affected American accent wear thin, revealing a slight disconnect between the projected persona and the actual artist – who speaks in a British accent on the spoken-word skits here. On Sauce, she brags of an attitude too confident for men to handle, self-diagnosing – unconvincingly – a case of “too much sawce” over a decidedly generic backing track.”

“Man of the hour Childish Gambino interweaves old and new on Saturday night, with an epic, funk-filled set, including two just-released summer anthems. 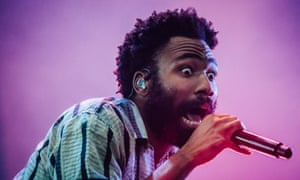 Invoking his distinctive onstage persona, Donald Glover’s set features bold choreography, chilling falsetto screams and dramatised facial expressions reminiscent of those in the viral video for his polemic hit This Is America – with which he ends the show, to scenes of synchronised thumping chaos. Throughout, Gambino manages to apply a newfound scale to himself and his music, and in doing so, reinforces his position as an unstoppable entity on the brink of another new, exciting chapter.”

“Fashionably punctual, Ravyn Lenae floats on stage at 9pm on the dot. It’s the Chicago neo-soul singer’s first European show, but the set-up is surprisingly advanced. Her name glistens on screen in a retro font as her four-piece band start up, and she appears, as glammed to the nines as her young, smitten crowd.

A cool and almost mystical teenage talent, Lenae has released three EPs in the last two years with Atlantic Records, and worked with Smino, Noname and Mick Jenkins from her home-town scene. But it’s her latest project, Crush, in collaboration with Steve Lacy of funk troupe the Internet, that’s solidified her ascension. Lenae plays it in full here.”

“Another defining feature of Gorillaz has always been their global scope, with reference to the environment on Plastic Beach, human fallibility on Demon Days and dystopian futures in response to Trump’s election campaign on Humanz. With returning talk of new worlds, searching and politics, on feel good summer single and first track Humility, Albarn even declares from the offset “Calling the world from isolation, cause right now that’s the ball where we be chained”. On The Now Now, the messaging perhaps feels more implicit, but the mood of the lyrics is still a decidedly Gorillaz’ blend of observant and melancholic.”

“Gorillaz live at the O2 Arena was always going to be an experience. With a back catalogue like theirs and a penchant for cinematic visuals, we were in for a treat, whether the performance took place in the physical realm or the virtual. Somehow – with screens packed with signature characters synchronised perfectly with songs and a full stage of unobscured, incredibly talented musicians – the band, collective, movement or whatever you might call them, were able to deliver both.”

“One should not be fooled by the seemingly sweet and gentle range of Syd’s voice. Fin, like much of The Internet’s neo-soul orientated material, serves to provide us with a soundtrack befitting of both good and – more notably – bad behaviour. The record is impressive in its ability to construct a cohesive space within which Syd’s softness fuses with a significant darkness – “If I go to hell I hope my bitches get to visit,” she purrs on Nothin to Somethin. The lack of apology, at a time like this, in a body like hers, must be seen as a political act in itself – a powerful dismissal is made on the first track to “shake em off/ there’s nothing you can tell me/ I’m grown”.”

Album: The House by Porches

“While The House feels like a reinvention of Porches in many ways, a few elements remain the same. The imagery of water that defined 2016 album Pool still seeps through Maine’s lyricism. The sounds of the album are still bound to trigger a nostalgia with its dreamy, ticking 80s compositions. And tunes like Find Me and Goodbye help to further cement Maine as the reigning champion of electronic melancholia. Over pounding beats and thumping synths, Maine’s voice breaks through in cries of anxiety and vulnerability, pulling at the heartstrings whilst you tap your feet subconsciously.”

“For an album titled Aromanticism, Moses Sumney’s debut is bizarrely intimate. As his dulcet falsetto laces together delicate acoustic structures, you might be under the impression that you’re listening to classic love confessionals. But as the lyrics creep through the honeyed instrumentation, the opposite becomes true.”

Album: Need To Feel Your Love by Sheer Mag